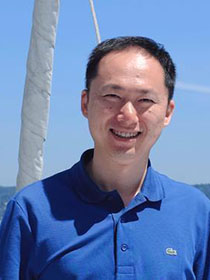 Dr. Xiaodong He is the Deputy Managing Director of JD AI Research and Head of the Deep learning, NLP and Speech Lab, and a Technical Vice President of JD.com. He is also an Affiliate Professor at the University of Washington (Seattle), serves in doctoral supervisory committees. Before joining JD.com, he was with Microsoft for about 15 years, served as Principal Researcher and Research Manager of the DLTC at Microsoft Research, Redmond.

His research interests are mainly in artificial intelligence areas including deep learning, natural language, computer vision, speech, information retrieval, and knowledge representation. He has published more than 100 papers in ACL, EMNLP, NAACL, CVPR, SIGIR, WWW, CIKM, NIPS, ICLR, ICASSP, Proc. IEEE, IEEE TASLP, IEEE SPM, and other venues. He received several awards including the Outstanding Paper Award at ACL 2015. He is a co-inventor of the DSSM, which is broadly applied to language, vision, IR and knowledge representation tasks. He also led the development of the CaptionBot, the world-first image captioning cloud service deployed in 2016. He and colleagues has won major AI challenges including 2008 NIST MT Eval, IWSLT 2011, COCO Captioning Challenge 2015, and VQA 2017. His work was widely integrated into influential software and services including Microsoft Image Caption Services, Bing & Ads, Seeing AI, and Word and PowerPoint. He has held editorial positions on several IEEE Journals, served as an area chair for NAACL-HLT 2015, and served in the organizing committee/program committee of major speech and language processing conferences. He is an elected member of the IEEE SLTC for the term of 2015-2017. He is a senior member of IEEE and a member of ACL. He was elected as the Chair of the IEEE Seattle Section in 2016. He received a bachelor degree from Tsinghua University (Beijing) in 1996, MS degree from Chinese Academy of Sciences (Beijing) in 1999, and the Ph.D degree from the University of Missouri – Columbia in 2003.